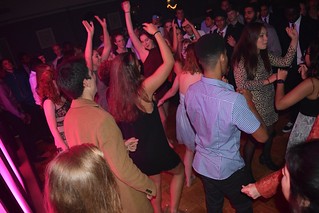 Male students attending the dance, held at the Knights of Columbus in Silver Spring, Maryland, left disappointed because their song requests never played.

To make matters worse, some students thought the DJ favored the girl’s requests over the requests of male party goers.

“The DJ was horrible, he would only play the songs the girls would ask for and played none of the songs the guys requested,” said Sanie Samura, a junior.

Samura rated the DJ five out of ten and preferred that he played more American hip hop artists such as Lil Uzi Vert, 21 Savage, and Drake.

“His music selection was okay,” he said.

Other chaperones claimed students enjoyed the music, plus they found it appropriate for a school dance. They also mentioned students danced and had fun.

“The music was swag,” said teacher Harris Moriarty. “Brittany Spears’ Toxic came on and they loaded the dance floor, and they didn’t leave until closing.”

Still, students felt differently, and even preferred a different genre of music.

“I’m not sure it would’ve made it better for everyone, but I like it way more than pop,” he said.