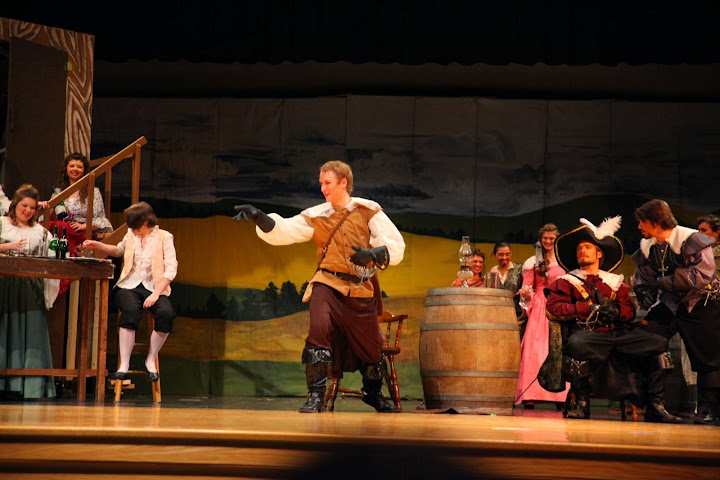 Christendom College is a small, Roman Catholic, liberal arts college in Front Royal, VA, founded in 1977. It is famous for its many programs and qualities that make it unique compared to other colleges, like its campus next to the Shenandoah Valley and its small class sizes. Another example, as several Avalon students and faculty members know it for, would be their theatre program.

The Christendom Players usually have two plays or musicals a year consisting of one in the fall and another in the spring. All students are eligible to audition, while other students may use their talents to help with work on the set, such as costumes, make-up, design and music.

The most recent production was Ken Ludwig’s theatre version of Alexandre Dumas’ 1844 novel “The Three Musketeers”, which was also performed by the Avalon and Brookewood Actors’ Guild in 2009. The play, held at Skyline High School, located about 6 miles from the college, from Friday Nov. 22 to Nov. 24. It was the 34th major production of the Christendom Players overseen by Keats.

Phillips compared The Christendom Players with the Avalon and Brookewood Actors’ Guild by saying they both come from small schools with a great deal of talent within them along with plenty of dedicated teachers.

“I think it is a great opportunity for people may not have been able to pursue a drama degree to be involved in theatre,” Phillips said. “I was interested in earning a degree in drama during my time at Christendom, but I had the experience to view it as an extra curricular activity that was taken very seriously [by myself and fellow actors and actresses].”

During his years at Christendom, Phillips played several lead roles in productions of The Christendom Players such as “The Winslow Boy” by Terrence Rattigan, “Hamlet” and “Midsummer Night’s Dream” by William Shakespeare, “The Jeweler’s Shop” by Pope John Paul II and “The Cocktail Party” by T.S. Eliot.

“I think, in general, Christendom College is a great fit and worthwhile consideration for Avalon students,” said Phillips, who explained that Avalon and Christendom have many similarities. The main similarity is that they are both small schools that both have a liberal arts curriculum, a strong core of very dedicated faculty and great opportunities involved.