Tobin, a sophomore, delivered the game clinching goal in the shootout’s fourth round after a GCA player hit the crossbar just above Avalon goalie Brendan Sloan.

Both teams finished regulation and two 10-minutes overtime periods in a scoreless tie.

“I thought the defense did really well holding their ground,” said Gilardi, a sophomore forward.  “I missed a few shots but we kept our heads up and got the win in penalties.” 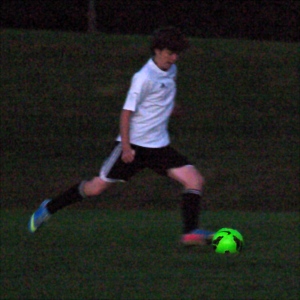 Sophomore Matt Tobin swings his leg back to deliver the game winning goal vs. Grace Christian Academy on October 22, 2013, in Germantown, Md.

Biagio Vignola  led the Black Knights defense which held Grace to minimal shots on goal. Vignola made numerous slide tackles and stopped a would be goal late in the first half with a dive that deflected the ball out-of-bounds.

“I feel like the team we played was strong but our defense held out,” said Vignola.
Avalon scored on all four penalty kick attempts while GCA missed two.
The Black Knights hosted the game at the Maryland Soccerplex in Germantown.
Avalon will play Takoma Academy Thursday for the MISAL championship, 7 p.m. at Riverdale Baptist.

One response to “Soccer Advances to MISAL Championship”