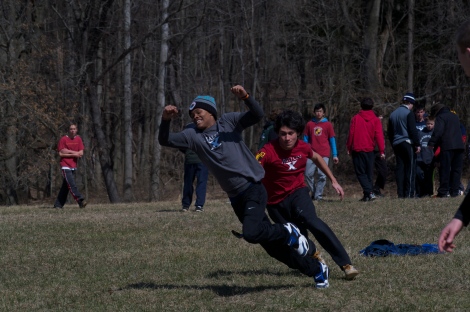 Washington House member Zamire Courtney, left, maneuvers his way around Stewart House competitor Tomas Alicea in a game of Capture-the-Flag at Great Seneca Creek Park in Gaithersburg, Md., during The Avalon School’s Our Lady of the Annunciation Festival Day.

After a Capture-the-Flag standoff at the Our Lady of the Annunciation Festival Day, the idea of rule changes went through many students and teachers minds.

The single game on March 22 lasted the entire afternoon, the portion of the day set aside for physical activities. Students typically play two or three Capture-the-Flag games in one session.

It was the longest capture the flag game in Avalon’s short history.

After a long stall, Carroll House senior Phil Corcoran made the first move when he darted from the safety circle with the flag.

Corcoran said, “I was about to get tagged and I saw Jimmy [Davern] right beside me; so I threw him the flag.”

Davern, a Washington House sophomore, caught the flag from Corcoran and was tagged just 20 feet from the middle of the field.

This would be the last advancement of the flag made by Carroll and Washington house despite several attempt to throw the flag forward.

The ended due to time, and grumblings from both Carroll House and Washington House students, and teachers, quickly ripped through Great Seneca Park, where the event was held.

Many rumblings suggested rule changes were on the horizon.

However, students disagree this is the best way moving forward.

“It happened once [the standoff] and it is premature to go change the rules now, it would be jumping the gun,” said Chronicle’s journalist Thomas Bonatti. Bonatti is a member of Washington House and mostly plays defense during Capture-the-Flag.

However, while most students wouldn’t like a major rule change some would not mind a few minor changes.

“I wouldn’t mind if the teachers made the game two hand touch, that way we can have a more competitive game,” said Smith.

Still, the lower and middle school competitors had a similar mindset to Bonatti.

The festival day ended in a tie, which left students with a bitter taste in their mouth wanting to get back out and finish their game next festival day.