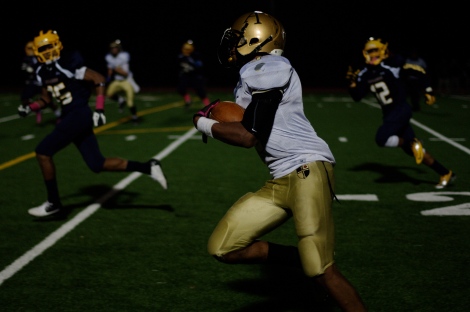 Senior running back Rachid Ibrahim carries the ball in his left arm as he sprints down the sideline en route to a 370 yard, 6 touchdown performance against Riverdale Baptist on October 26, 2012 in Upper Marlboro, Md.

“He’s remarkable, what can I say? All he needs is a little bit of daylight, and he’s gone,” said head coach Tad Shields.

Ibrahim had scoring runs of one, two, two, 27, 79, and 89 yards and accounted for three two-point conversions.  He followed up on last week’s impressive 324 yard, two score performance against Potomac School.

Late in the fourth quarter with Avalon ahead by one point, Ibrahim scored on an 89 yard run which became the game winning drive.

After a Riverdale score, Avalon recovered an onside kick and iced the game when Ibrahim converted two first downs and the Black Knights we able to take a knee to kill the clock.

“Their defense was giving us off- tackle, and we just kept pounding it there,” said Shields. “Our O-line was opening up holes, and our fullback was doing a great job of kicking out, so it was 11 guys working together and doing a great job today.” 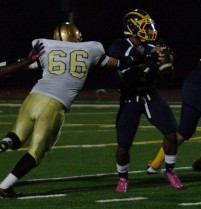 Although Avalon led for most of the game, it wasn’t an easy road to the one point victory, as Avalon’s pass defense was torched by Riverdale quarterback Nate Washington.

Washington threw for 275 yards, three touchdowns, as the Black Knights gave up several big plays throughout the game.

Avalon was able to apply pressure to Washington, but the Black Knights were unable to sack him except for twice. Washington was consistently able to get just enough time to either hit the open receiver or roll out of the pocket and do the same.

“We tried everything on defense. This zone, that zone, hard man, soft man, but it didn’t seem like it mattered,” Coach Shields said.

Avalon (5-4, 4-0 CAFC), having wrapped up conference play and secured the number one seed in the conference, will take on St. James next Friday in Hagerstown.